Mini Six Revised still lacks a firm commitment. Here's why: I don't want to bite off more than I can chew. The health problems from last year continue to trouble me. It's hard to read and write when recovering from seizures.

Some work is done on it - the "bare bones" of the revised edition is essentially done (that's not saying much since so much is the same as the current edition.) What's still missing are most of the bells and whistles which will make the effort of putting out another book worth it. A "freeform" magic system is underway, and new rules for movement and combat which abstract the action to theater of the mind instead of a battlegrid with minis (with optional miniature rules.)

Also missing is the art (mostly), the new settings (mostly), and of course there's still the layout process to go through when things start shaping up (I'll need a new PC as well.)

All that said - for now progress continues, slowly, and without any firm launch date in mind.

When I reach the art and layout stage, I'll make the decision whether to proceed with a Kickstarter or self-fund.

Preview: I have a little bit of fun stuff to show you. Here's a piece of concept art for a new sample setting I've been working on: 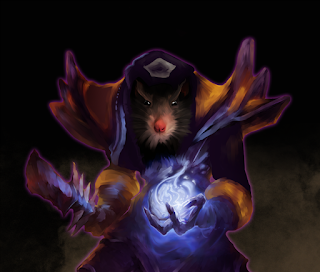 The black rats under the manor aren't officially recognized by the lord. They've been down there for centuries - awakened long before mousekind, but unable to bear the light of day. The manor was built on ruins of a castle which fell into disuse in the 1350's. The lord of that keep had been a man of learning and an accomplished alchemist. Long exposure to the sorcerer's stone kept in his subterranean laboratory awoke them to full consciousness.

Indeed, all of mousekind probably owes the rats a debt, because it was a black rat that intentionally corrupted the experiment of the last human Lord Blythswood using the sorcerer's stone itself - although polite society considers this tale to be a falsehood.

The black rats of the under-manor are said to be immortal, to be completely unable to come into the sunlit outdoors, and to be able to wield magic without the use of elixir. Rumors persist that the ultimate source of all elixir is in their domain, and that at least one group of slavers work exclusively to supply them with the only thing which will sustain them, live mice.

Next Update: Mini Six Revised isn't running on a schedule yet. I will update when there's some progress, I have something to show, or in about a month just so you know that there isn't any progress. Hope to see you soon.