I've had a few days to think about the quickly-moving story of the Open Game License drama.

The latest statement by WotC says that content released under OGL1.0a will be "unaffected." It may or may not be possible to release new Mini Six BBE/OpenD6 content after they clarify exactly what they mean, at least according to them.

There are three entities at play here. Wizards of the Coast owns the copyright on the OGL, and recently they claimed the authority to deauthorize versions. We all know that revocation of 1.0/1.0a is likely to be fought in court by a company bigger than APG, and many believe that they will lose that case. This takes time to resolve, however.
The second entity is Nocturnal Media. They own the OpenD6 property. They are the only ones who can release OpenD6 under a truly free license, such as CC-BY-SA. Unfortunately, they have even less involvement directly with the community than I do. Their website is dark, and to my knowledge, they have never mentioned OpenD6 itself. They seem to exist only "on paper," occasionally licensing the D6 system proper to third parties, which of course means nothing to an OpenD6 publisher.
Then there's me. I can't count on WotC to do the right thing in the long term. Even if they bend completely to popular sentiment tomorrow, there's no guarantee they won't reverse their position when the next edition of D&D is released. I also can't count on Nocturnal Media. I have no issue with them, but they're distant and seemingly inactive. So I have to be the one to move things forward, and certain solutions are impossible for me or distasteful.

First, I'll address the present. Mini Six Bare Bones Edition will continue to exist as an OpenD6/OGL1.0a product for as long as the legal status remains unambiguous. In other words, if WotC holds true to its word that previously released OGL1.0a content may remain, unchanged and without having to update the license, Mini Six BBE will remain available, including a possible return to print (but that's a low-priority right now.)
However, future content, revisions, etc., will not be released as an OGL or OpenD6 product. 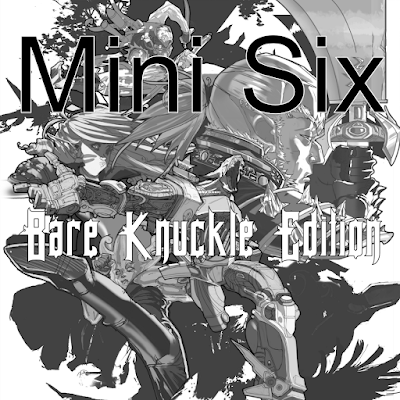 Mini Six BKE will be released as an open product. I haven't decided on the license yet, but the leading contender is CC-BY-SA. If Paizo's ORC meets its stated goals and has some compelling features, then I may consider it, but I doubt that it's ready anytime soon.

Mini Six BKE will look very familiar to anyone who has seen Bare Bones Edition, but there will be some changes. Bare Knuckle Edition will exist as an "SRD" that others will be able to reuse, copy, remix, or whatever.

It won't include any mini settings.

It will exist as a "living" document. The first released version will be BKE 1.0. That version will be the closest to Bare Bones Edition that I intend to release. BKE 1.0 will remain available, under an open license, forever.

1.0: A clean, rules-only version mechanically similar to Bare Bones Edition (with changes as noted above.) It will be sparse, and not intended as a "full product," since it won't include much in the way of anything, other than mechanics. It will basically be an "SRD."
1.001 to 1.999: Work-in-progress versions of the rules as I reach toward the version of the rules that will be included in Mini Six Revised Edition. These versions may or may not see any public release.
2.0: All of the rules from Mini Six Revised Edition.
Mini Six Revised and Mini Six Bare Knuckle Edition 2.0 will use identical rules. BKE 2 will be made available under an open license, and Revised won't be - that way it's clear exactly what is released in the open. Everything in BKE will be free for anyone to use under the terms of the license I ultimately select.

As you can see, I still haven't settled on a final title for the next "full" edition of Mini Six. However, since Mini Six will now be growing without the OpenD6 banner, I no longer feel so bound to keep things the same. The game will evolve.
Before the OGL drama came to a head, Mini Six 2 was going to be mostly a refinement of the core rules and presentation, with added mini settings and more rules "modules."

Now, not so much. The rules themselves are no longer a given. The ultimate product may look quite different from the original edition, but the ethos will remain the same.

For example, the original edition used "classic D6" style rolling - sum up your dice. I've always liked the variant system where you instead roll for successes like in World of Darkness games or "D6 Legend" so that's what I'm exploring now. This doesn't mean that the revised edition will be a clone of Legend, but it's likely to bear that superficial resemblance.

The first thing I need to do is clean up and finalize my Mini Six Bare Knuckle 1.0 document. It will be available in a no-art text-only format, and probably as a PDF.
Things you will and won't see in BKE 1.0:
Remember that BKE 1.0 is supposed to be very similar to Bare Bones Edition. the changes I have planned for my later revised edition won't be implemented here. You'll still roll a number of dice and sum them, instead of counting successes. BKE 1.0 will be very close to my original intention for the revised edition but without the addition of lots of new rules modules, mini settings, art, advice, etc.
All of the above would be fairly simple for someone to ignore or alter to more closely emulate BBE if they want to. The point of BKE 1.0 is that if a third party wants to build onto something very similar to Bare Bones Edition (as it already exists) without using the OGL or the OpenD6 license, this will allow that.
Future versions of BKE (2.0, for example) will exist so that people can use the rules from my future edition of Mini Six under an open license.

BKE 1.0: "Soon." I have a few things coming up this week that will eat into my schedule a bit. I already have a good start, but I need to completely do the magic system still, and I still have to go through the text again and make certain I'm not using any OpenD6-specific terms or properties. My hope is by the end of  January, if not the end of this week. I seriously doubt that Paizo's ORC license will be ready anytime soon, so CC-BY-SA is the most likely option.
Mini Six Revised: I don't know. I'm going to start working on it as soon as BKE 1.0 is ready, but it's become a more ambitious project than I originally planned. I'm just one person, and I've never done some of the things I need to do. Also, I don't want to rely on only stock art, yet also don't want to operate a Kickstarter. (I think that would be unfair considering no one knows if I can hold to a schedule yet.) Setting funds aside for art and waiting for those commissions are likely to be the longest parts of the project. So I think it's now best to say, it will be done when it's done.

I've flirted with the idea of producing a Mini Six Revised for half a decade now. There have been personal issues and issues regarding my coauthor, Phil, which have hampered the project. Here's the thing. Mini Six accomplished its primary goal. At the time that Mini Six was published, Phil and I felt like we were racing the clock to preserve a legacy. The (former) owner of West End Games had grand ambitions to release the D6 system under the OGL, but the last vestiges of WEG seemed to be rapidly crumbling. There was a plan by WEG to release the OpenD6 Trademark License, which was the last legal minutia which was required for third-party publishers to carry on. Early summer turned to Gen Con time, then fall came, and things seemed bleaker at WEG by the week. By December, we had a plan. Mini Six was published because we feared that the Trademark License might not end up being released before the lights went out at WEG forever, leaving D6 / OpenD6 in limbo. So, we thought

What does the OGL 1.1 drama mean for OpenD6 and the future of Mini Six?

Update 1/9/23: Regarding the question "Who owns OpenD6?" from a previous post. I've included this edit there as well, but also want to post it here to make sure everyone sees it. Thanks to everyone who has contacted me or provided guidance concerning ownership of OpenD6. The short answer is that Nocturnal Media is still the owner of WEG/D6/OpenD6. I'm not seeking any more information on the matter but publicly urge the owner to consider releasing OpenD6 under a Creative Commons license (or something similar) in the event that the OGL drama creates ambiguities or ends the current 1.0a license. Please do not reach out to anyone or send any messages on my behalf.  I respect the privacy of all involved and don't want to annoy anyone. I'm happy to receive any news regarding the status of OpenD6 from the owner or anyone authorized to speak for them should they choose to communicate publicly or privately. It's obvious that until things become official and clear r

Thank you for staying tuned.

The most important thing to share right now is that I don't have any significant news to share about Mini Six Revised. Last year, I made an attempt at finally doing it, and it turned into another project completely, so far removed from Mini Six that it's something else entirely. I don't think the world really needs another multi-purpose RPG engine right now, at least not by me, so I shelved that and started over. And every time I get to work on Mini Six, I end up right back at that unintentional diversion again and again, like it's a magnet that keeps drawing me in. I still have cognitive issues which means that I work slowly. For those who used to spot me elsewhere on the internet, you may have noticed my greatly reduced presence. It's not like I have nothing done for Mini Six, but it's far from being enough to justify a new edition right now. The rest of this is personal, so feel free to skip it. Most important is a family emergency which has me conc